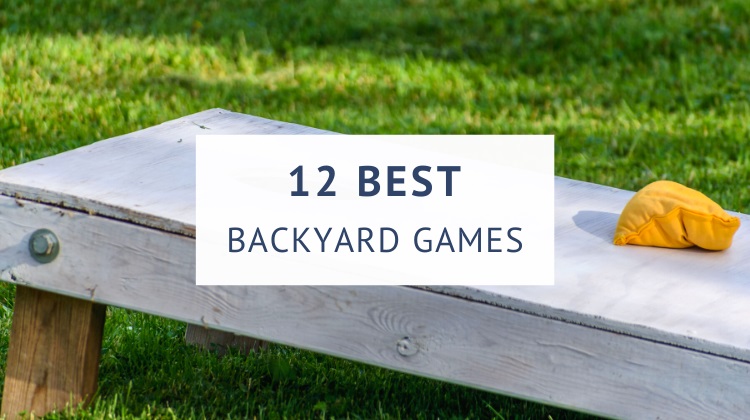 They often say, the best family time is spent outdoors. That is something I live by, which is why I’ve always put so much effort into creating my dream backyard.

One way to put the backyard to good use is by playing outdoor games with family and friends. It’s a great way to spend an afternoon outdoors and bond with the people around you.

In this article, I am going to share my personal top 12 backyard games that are suitable for the whole family.

Keen to discover even more fun games to play outdoors? Check out my list of giant yard games for some great options.

In no particular, here are 12 fantastic games you can play with your family and friends in the backyard.

Let’s kick off this list with a backyard favorite, cornhole! It’s one of the easiest to learn games and is suitable for all ages and fitness levels.

There are a lot of fascinating stories doing the rounds about the history of cornhole, and a lot of these stories need to be taken with a grain of salt. But what we do know for a fact is that the first patent filed for a game that strongly resembles today’s cornhole was as early as 1883!

The game of cornhole has come a long way since then, and today it is one of the most popular games to be played at tailgating parties, parks, beaches, college campuses, and backyards.

At its core, the objective of the game is very basic. Throw a small bean bag onto a wooden platform with a hole in it. Points are scored if the bag ends up on the platform or in the hole. For all the necessary ins and outs, read my guide to playing cornhole for beginners.

It may be one of the oldest games in the world, but bocce ball is surprisingly easy to learn and doesn’t require a lot of equipment at all. In other words, it’s the perfect family backyard game!

A typical bocce ball set includes 8 balls (usually in two colors), and one smaller ball (usually called a jack, or pallino) which functions as the target ball.

The objective is to throw (or rather, bowl) the balls so that that land as close as possible to the target. Each team or individual takes turns in bowling their bocce balls.

At the end of each round, a measuring device can be used to determine which balls are closest so that the scoring remains fair.

Check out my list of best bocce ball sets.

Another backyard game with a rich history is Croquet, which sounds a lot fancier than it is. It’s a pretty basic game, but so much fun.

There are different versions of the game, with the 9-wicket variant being the most common to be played in the backyard. The wickets need to be set up in a specific way, and the objective is to hit the balls through the wickets.

To learn more about the ins and outs of this backyard game, check out my beginners guide to croquet which explains the rules and the setup. It’s a fun game that is suitable for people of all ages and fitness levels, and you will find that it’s a great game to bond with friends and family.

Also known as washer pitching, tailgate toss, or simply washers, the washer toss game is similar to cornhole and horseshoes in the sense that you need to “toss” an object trying to get it as close to a certain target as possible.

In the case of washer toss, the objective is to throw a small round object (a washer) into a square-shaped box to earn a point.

Bonus points can be earned if the washer ends up in a small cup in the center of the box, which is the ultimate goal of this game.

This may sound easy, but there is quite some skill required to get good at this game. The setup is very basic though, with lots of affordable washer toss sets available online.

Check out my list of best washer toss sets.

Horseshoe pitching is a rather traditional lawn game that revolves around throwing horseshoe-shaped objects against a target stake in a lawn or sandbox area.

It’s a team game (usually two against two), but it can also be played with individuals, which makes it very suitable as a fun family backyard game.

Like most backyard games, horseshoe pitching is easy to learn, but it’s a very serious game, or sport even, with national championships and an official national association.

Check out my list of best horseshoe game sets.

You might know the ladder ball toss game as lasso golf, and as the name suggests, this entertaining backyard game revolves around throwing two balls tied together onto a ladder.

Ever seen a pair of tied-up shoes hanging on telephone wires and power lines? It’s the same concept.

Ladder ball is super easy to set up, with two ladders with three rungs and six sets of bolas in two different colors.

The objective of this game is to throw the bolas at the ladder in such a way that it wraps around a rung to score a point. Sounds easy? Try it out!

Check out my list of best ladder ball toss sets.

Kubb is a traditional Swedish outdoor game that is a bit of a combination of bowling and horseshoes. It’s a fun game that is easy to learn, and suitable for the whole family.

The concept of kubb is to throw wooden sticks (batons or dowels) at a set of wooden blocks (kubbs) and knock them over. A larger wooden block (the king) is placed in the middle of the field.

Two teams are playing against each other from opposite sides trying to knock over the other team’s kubbs, followed by the king once all kubbs have been knocked over. As you can imagine, kubb is a super entertaining game that can be played by anyone keen to have a few hours of fun outdoors.

If you’d like to learn more about this backyard game, be sure to check out my guide explaining how to play kubb, with an outline of the rules and the field setup.

Check out my list of best Kubb game sets.

Spikeball is perhaps more of a sport than it is a game, but with a small setup and relatively easy to learn rules, it’s a great game to play with the family in the backyard.

Originally known as Roundnet, spikeball is very much based on the basic concepts of beach volleyball, with two teams of two playing against each other using a net and a ball.

In this case, the net is a circular net on legs placed in the center of the playing field. Check out my guide to playing spikeball to learn more about the rules.

You do need a lot of practice to get good at spikeball, but that’s even more reason to get into the backyard and start playing this energetic game.

Check out this spikeball set available on Amazon.

Molkky is a Finnish throwing game that has elements of billiards and bowling. The game requires strategy, good throwing skills, and of course a healthy dose of luck.

The Molkky playing field consists of 12 pins, or skittles, numbered from 1 to 12. The goal is to knock over these pins with a throwing skittle, the Molkky.

The game gets more complicated as it progresses, with a rather unusual scoring system and an ever-evolving playing field.

If you’d like to learn more about this fantastic game, check out my guide explaining how to play Molkky with an outline of the rules, the field setup, and the scoring system.

Check out this Molkky game set available on Amazon.

The game of ring toss will appeal to kids specifically because it’s so easy to learn, easy to set up, and easy to play anywhere you like.

A typical ring toss set includes a small structure that holds five pegs. The idea is to throw rings (made with plastic or rope) at the structure with the aim to fit them around the pegs.

Points can be scored depending on which pegs the rings have been attached to and whether the rings are touching the pegs.

For kids, this is a great backyard game to not only have fun but also improve their coordination skills. And for adults, ring toss is a great game for a couple of hours of relaxation.

Check out this ring toss game set available on Amazon.

Tetherball is a fun backyard game that both adults and kids will enjoy playing, and a tetherball court is also quite easy to set up.

The basic concept of this game revolves around two players hitting a ball that is attached to a pole with a rope.

The purpose of the game is to try and get the rope completely wrapped around the pole, such that the opponent can’t hit the ball anymore.

Read my guide to playing tetherball, with a full breakdown of the rules of this fantastic backyard game.

Check out this backyard tetherball set available on Amazon.

The last one in this list of best backyard games for families doesn’t require any equipment at all, yet it might well be the most entertaining game to play.

While hide and seek at its core is a very basic game, there are rules involved that you may not be aware of. There are also lots of variations you can try out with your kids to make the game more exciting.

Check out my guide to playing hide and seek, with a summary of the rules and also a few examples of those game variations.

If your backyard isn’t big enough to play hide and seek, you can also include some indoor areas of your house. Or otherwise, head to a nearby park with lots of trees.