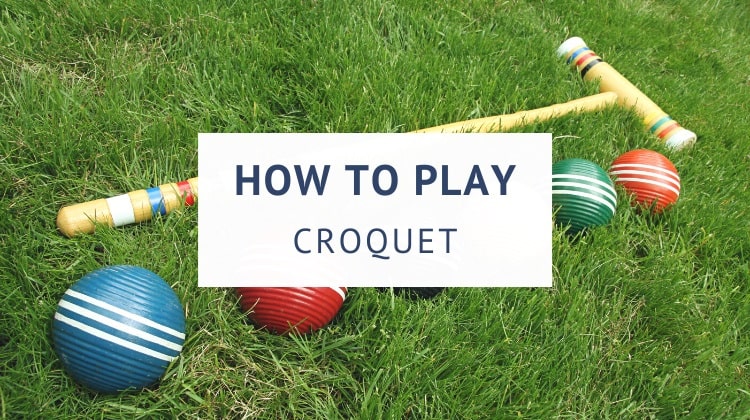 Croquet is an entertaining lawn and backyard game that can be played by two to six players, either individually or as teams.

The game has increased in popularity in recent times, with many variations and spin-offs to choose from, such as Golf, Extreme, Six-wicket, Garden, Nine-wicket, and Ricochet, to name a few.

But how exactly is this game played? Grab a mallet and learn how to play croquet for beginners. This article delves deeper and details the rules and setup of the nine-wicket variant.

Croquet is a lawn game where players hit balls through hoops, otherwise known as wickets. A wooden mallet is used to shoot these balls. You can play this game on any flat surface, be it in your backyard or on a professional court.

The game’s primary objective is maneuvering your balls across the lawn and through the nine strategically placed wickets. The balls need to go through the wickets in the correct sequence and direction.

It remains unclear how the game croquet was invented. Some sources claim it originated from the French game “pall mall”, while other theories assert that pall mall was more golf than croquet.

History pinpoints the first documentation of the present game to 1852. During this time, the Irish game “crooky” was launched in England. John Jaques, a London-based sporting goods manufacturer, started manufacturing croquet sets for widespread use and recreation.

Upper-class individuals mostly played initial croquet games, but by 1870, its popularity had spread throughout England and its colonies. The surge in popularity saw croquet introduced in countries like the United States, Canada, Australia, New Zealand, and South Africa.

However, the emergence of lawn tennis slowed down croquet’s momentum around the start of the 20th century, and it wasn’t until decades later that the game of croquet was revived.

Come 1950, Americans had learned how to play croquet. It was played across the US mainly as a recreational sport. From then to the present, the game has been on an upward trajectory. In Canada and the US, the recreational 9-wicket croquet is prominent, while garden croquet is more popular in the UK.

Croquet is quite a sophisticated game that requires good skills and a sense of strategy.

It’s not a wild and action-packed backyard game; instead, it’s a game that allows for a bit of thinking, strategizing, considering, aiming, and so much more. And all of this happens in a relaxing environment shared with family and friends.

GoSports Six Player Croquet Set
BUY ON AMAZON
Are you ready to play this fun game in your backyard? Check out my guide with reviews of the best croquet sets so you can start practicing with your friends and family at home.

Different croquet versions have unique rules. The United States Croquet Association (USCA) has a rule book that governs 9-wicket and other versions.

Nine-wicket croquet is the ideal recreational game for friends and families, and that is what I am discussing in this article. It’s the simplest form of croquet, best suitable for backyard play.

To explain how to play croquet, I am going to discuss the following:

The first step in learning how to play croquet for beginners is knowing what equipment you need.

The mallets and balls typically come in six different colors; one color per player.

A croquet mallet is a wooden rod with a hammer end that’s used to strike the ball. The mallet’s length can be between 26 to 35 inches and weighs anywhere between two to three pounds. The hammerhead measures around 12 inches and can be square or round.

Note that sometimes the heads are referred to as the mallets. However, we are referring to mallets as both the handle and the head.

Croquet stakes are typically made from wood and have colored markings that match the colors of the mallets and balls.

Stakes are installed at all ends of the croquet court, approximately 6 feet from the boundary.

A backyard croquet set comes with six balls. The balls have a diameter ranging from 3 to 3.6 inches and can weigh up to 16 ounces.

As mentioned, the mallets and balls have matching colors, so each player plays with one mallet and one ball of the same color.

The wickets are fixed to the ground and are roughly 4 inches wide and 12 inches high.

You have to know how to set up the playing court when mastering how to play croquet for beginners.

You can play this game anywhere, provided the surface is flat, and the grass is short. The court’s surface must also be soft enough to install the wickets.

You will need nine wickets and two stakes. Optional items such as chalks, flags, and strings also come in handy.

A standard nine-wicket court measures 100 feet in length and 50 feet in width. Of course, the lawn doesn’t have to be that long, but whatever measurements you choose, ensure that all sides are scaled down in proportion. The settings below are for a 100 x 50 feet lawn.

Once you mark the boundaries of the playing court, the next step is setting up the stakes, followed by the wickets:

These are the settings for one half of the lawn; follow the same process when fixing the remaining wickets on the other half.

The objective of nine-wicket croquet is to be the first player to score 14 wickets and 2 stakes in the correct order.

Before playing, you will need to determine the number of players and which player to go first. Each player will get one mallet plus a ball of the same color.

The order of play is determined by the colored markings on the stake. The player with the color that is highest on the stake goes first.

The game starts by placing the ball between the starting stake and the first wicket. From there, the first player must try and shoot the ball through the first wicket, followed by the second wicket, and so on.

Once a player hits the stake at the other end of the field (after completing the first 7 wickets), they turn to complete the remaining 7 wickets, after which they need to hit the starting stake to end the game.

Now that we’ve discussed the field setup and objective of the game, let’s dive a little deeper into the rules of croquet.

Each player gets one shot per turn. However, bonus shots can be earned when one of the following happens:

Scoring a wicket or hitting the stake results in 1 bonus shot. Note that the ball must pass through the wicket entirely for it to be a score.

In other words, a player can, in theory, complete and win a game in just one turn.

Players earn a wicket only if they strike the ball through the wicket in the correct direction.

Hitting the ball through the wicket in the wrong direction is allowed but won’t earn you anything.

Ball out of Play

If you’re playing with boundaries around the court, and a ball goes out of play, there are rules to consider.

To bring the ball back into play, place the ball one mallet’s length (or 1 meter) from the boundaries into the field where the ball exited the field.

You’d be forgiven for assuming that croquet has complicated rules, but hopefully, after reading this article and playing a few times, you will find it’s pretty easy to pick up.

Croquet certainly isn’t for everyone, and I also find that the vibe is very different from, for example, playing a game of washer toss.

But ultimately, croquet is a fun game that allows for bonding between friends and family in the yard. It has certainly become one of my favorites in recent years.

2 Comments
Leave a Comment Cancel reply
Welcome to The Backyard Baron, your online guide with lots of tips and ideas to turn your backyard into a real outdoor haven.
Latest