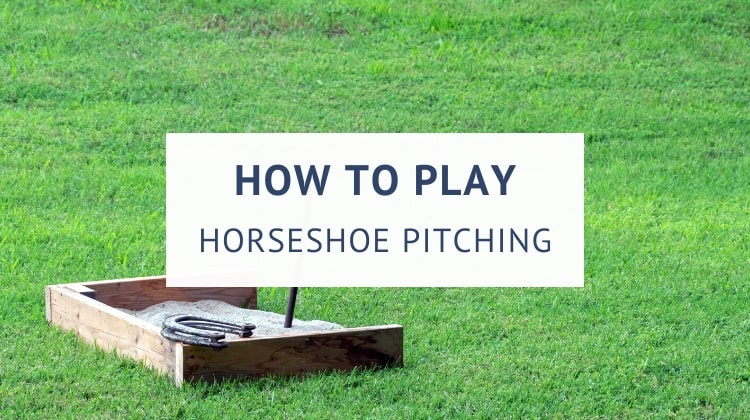 This target-throwing game is simple and fun for the whole family, but people’s differing thoughts and opinions about the rules can cause confusion.

In this article, I will be going over the rules of the horseshoe game, the common terminology used in horseshoes, and how to keep the score.

Horseshoe pitching is one of the more traditional lawn games, a game that revolves around throwing horseshoes against a target stake in a lawn or sandbox area.

It’s a serious enough game or sport that it has its own governing body, the National Horseshoe Pitchers Association (NHPA), which maintains the rules and specifications of the game of horseshoes.

As with so many lawn games, there are various stories and urban myths surrounding the history of the game of horseshoe throwing, but there is a common belief that the game is closely related to the traditional game of quoits.

The similarities between the two are obvious, as the concept of quoits is to throw a metal, rope, or rubber ring away to land over or near a planted spike.

I am quite a traditional person, and as such, I appreciate the traditional nature of this game.

What I also like about horseshoe pitching is that anyone can start playing this game, because the basic rules can be picked up quite easily.

But at the same time, it’s also a game that requires skill if you want to be really good at it, so there will always be room for improvement.

Baden Champions Horseshoe Set
BUY ON AMAZON
Are you ready to play this fun game in the backyard? Check out my list of best horseshoe game sets so you can start playing at home with your friends.

To explain the game of horseshoe pitching, I am going to walk you through the following topics:

Let’s first have a look at some of the terminology used in this fun game.

A few phrases and terms are essential for any horseshoes player to know, ranging from the lines you throw behind, to the objects you throw:

Setting up horseshoes is easy and only requires a few steps.

First, you put your stakes in the ground. According to the National Horseshoe Pitchers Association of America (NHPA), the stakes should be 40 feet (12 meters) apart (source), but if you are a beginner, you may want to put them closer together.

You then draw the foul line three feet in front of each stake, and that’s all you need to do to get the court ready for playing horseshoes.

In NHPA matches, they also create a pit around the stake, but this is not a requirement for casual games. For a bit of fun in the backyard, it’s best to keep things simple.

If you’d like to know what an official horseshoe court looks like, check out my guide to horseshoe court and pit dimensions with a complete outline of all the elements that make up a horseshoe playing area.

Here is a sneak preview:

Horseshoes is a team game, and you should play it with two teams with two players on each team, although you can of course also play one against one.

Once you have decided on teams, you can either flip a coin or throw horseshoes to decide which team goes first. If you opt for the latter, all four players throw a horseshoe, and the player whose horseshoe is closest can choose whether they want to go first.

The teams then split up, with one player from each team going to each end. Whichever team has the first throw will begin by tossing (also called pitching) their horseshoe at the opposite stake.

Teams alternate their throws, meaning after each throw, the opposing team will get a turn. Once you finish a round, players at the other end of the court have their turn.

Throws must be underhand and must be behind the foul line. Your foot can be on but not crossing the foul line and your pitch will still count, but if any part of your foot passes the line, your pitch won’t count.

Each player pitches two horseshoes before the scoring for that round is counted. In NHPA matches, teams play until one of them has 40 points. However, many amateur players prefer playing to 21 points. You can play up to whatever score you choose, but it is essential to make sure everyone knows in advance what score you are playing up to.

Once a team reaches the target score, they are declared the winner! You can always go for the best two out of three, or three out of five.

Teams can earn a maximum of 6 points in any given round.

The scoring is as follows:

After both teams finish pitching, the first task is determining which horseshoe is closest to the stake. Ringers are automatically considered to be the closest horseshoes to the stake.

After ringers, leaners are considered the closest a horseshoe can be to the stake. After leaners, horseshoes touching the stake while flat on the ground are closest.

If no ringers or horseshoes are touching the stake, you measure which horseshoe is closest to the stake by determining the distance from the horseshoe’s closest point.

In horseshoes, the concept of cancellation scoring is used. This essentially means that only one team can earn points per round (or inning).

To illustrate, let’s have a look at a few examples:

In NHPA rules, only pitches that land within one horseshoe length are eligible to be counted for scoring purposes. You can choose to include your own version of this rule and make it whatever length you choose based on your skill level.

Horseshoes is a friendly game, and you should treat it as such.

Competitiveness is encouraged, but you shouldn’t let it get out of hand. Distracting players, verbally or non-verbally, is not appreciated.

There are no referees in horseshoes, so it is up to players to enforce the rules on other players, and more importantly, themselves. If someone calls a foul, don’t respond negatively, hear them out, and if you disagree, of course, you do so respectfully.

Most importantly, be kind and have fun!

Keen to improve your technical skills in horseshoe pitching? Check out my guide explaining how to throw a horseshoe with an outline of the different grips and techniques involved.

As you might have guessed, the game of horseshoe pitching does require skills if you want to be really good at it. But as with so many backyard games, horseshoes is also the perfect recreational game that anyone can play.

A brand new horseshoe set isn’t expensive at all, so go ahead and buy yourself one of those so you can start practicing this game tomorrow.

11 Comments
Leave a Comment Cancel reply
Welcome to The Backyard Baron, your online guide with lots of tips and ideas to turn your backyard into a real outdoor haven.
Latest