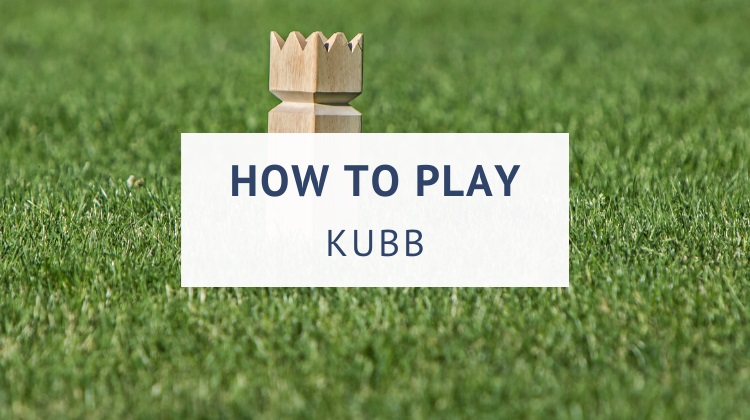 If you’re looking for a new and rather unique game to play in your backyard, then you’ve come to the right place.

Kubb is an exciting game that can be played with anywhere from two to twelve people, and is a social as well as an energizing game to play.

Read on, and learn what exactly Kubb is and how to play it!

Often referred to as “Viking Chess”, Kubb is a lawn game where players from one team try to knock over all their opponents’ blocks, known as “kubbs”, with wooden batons.

The team that knocks down all their opponents’ kubbs first, plus the so-called king kubb in the middle of the playing field, wins.

Legend has it that Kubb was originally a Viking game, hence the nickname, “Viking Chess”. However, there isn’t any evidence demonstrating that the Vikings had anything to do with Kubb’s invention.

The earliest mention of any game resembling Kubb comes from 1911 Sweden, and is a variation on another Swedish game known as “Skittles”.

Sometimes we all want something that is a little different. And that’s where Kubb comes in.

Kubb is a unique game, unlike any other backyard game. It’s also quite a sophisticated game, with some strategical thinking and technical skills involved.

GoSports Kubb Game Set
BUY ON AMAZON
Are you ready to try this game out in your backyard? Check out my list of best Kubb sets so you can start practicing at home tomorrow.

So, how do you play Kubb? If you’re reading this, it’s likely that you’ve never played this game before.

Fortunately, it’s not that difficult to learn, and once you’ve played it a few times and understand the basic rules, you are going to love playing Kubb in the backyard.

To explain the game of Kubb, I am going to walk you through the following topics:

To start playing, you will need a Kubb set, which typically includes the following:

You will also want to use a tape measure so you can accurately measure the playing field, and, optionally, also a string to create the boundaries.

The size and weight of the blocks and batons will vary depending on the Kubb set you purchase.

It’s a good idea to do a little bit of research to find a Kubb set that will work best for the people you’re going to play with.

The first thing you need to do is set up your Kubb field, or court. Make sure you’re on level ground before setting anything up. Grass is best, but you can play this on the beach or even in the snow if you’re living in a cold climate.

Put the stakes in the ground to create the field: one on each corner and two in the center opposite each other. It can be any size as long as it’s rectangular.

Note that competitive Kubb players use a field that’s 26 by 16 feet (8 by 5 meters), but you can change this up and use alternative measurements as you see fit.

To determine the most ideal size, consider what is likely going to be easiest for the players. If you plan on playing with children, a smaller, wider court will work better than a longer, narrower court. The same is true if most, or all, players are beginners.

Once you have your field set up, take the string (optional) and tie it around the six border stakes to create a visible boundary.

These blocks sit up on end, so you might have to press them into place in the grass or sand.

Set them up evenly across each end of the court, with the space between the outside blocks and the edge of the court about the same as the length of a baton.

These are each team’s baseline. When you’ve got them in place, put the king kubb in the center of the court, and you’re now ready to start playing.

The first thing you do is, of course, decide which team gets to go first.

Select one person from each team, and have them throw a baton toward the king kubb. Whoever gets their baton closest to the king kubb without knocking it over goes first.

You must throw your batons underhand so they fly end-over-end. You can’t throw them overhand, helicopter-style, javelin-style, or any other way.

Each of you takes a turn using four of your six batons to try and knock over the kubbs on your opponent’s baseline. From there, you move on to the rest of the game.

Phases of the Game

Kubb has four phases you play after each team has had their first turn.

Phase 1:
You collect any kubbs knocked down during your opponent’s turn and throw them to their side of the court. They raise each thrown kubb upright, making sure to keep two corners in contact with the ground. They do the same thing with any kubbs you knocked down.

In the event you throw a kubb outside the court, you have to go get it and try again. If it lands outside the court again, your opponent gets to pick it up and put it on their side anywhere they like, as long as it’s at least one baton’s length away from the king kubb.

Each of you moves to the kubb closest to the court’s center line. That is your new throwing line.

Phase 2:
Now it’s time to try knocking down field kubbs. You throw your batons at the field kubbs the same as you would when trying to hit baseline kubbs.

If you knock down all the field kubbs before you’re out of batons, you then use your remaining batons to try and knock down your opponent’s baseline kubbs.

If you accidentally knock down a baseline kubb before you’ve knocked down all the field kubbs, your opponent just places it upright on the baseline.

Phase 3:
When you’ve knocked down all field kubbs, you can go after your opponent’s baseline, and vice versa.

Phase 4:
If you have any batons left over after you’ve knocked down all your opponent’s kubbs, you can try and go for the king kubb.

Whoever knocks down the king kubb first, wins the game.

Kubb is so much more than simply throwing sticks at blocks and trying to knock them over. There’s a bit of strategy involved, too, that can increase your chances of actually winning.

When you’re tossing kubbs to your opponent’s side of the court, try and toss them so they land as close to the center line as possible.

That might sound like you’re giving the game to your opponent, but in reality, the closer field kubbs are to you, the easier it is for you to knock them down. We’ll discuss this in more detail in a moment.

You want to make it hard for your opponent to hit it, but you don’t want to give yourself a bad throwing line.

Which Field Kubbs to Hit First

When it’s your turn to go after field kubbs, aim for the nearest ones first. You’re more likely to knock them down, giving you a better chance at getting to your opponent’s baseline kubbs before you’re out of batons.

Also, if you aim for the nearest kubbs first, you’re more likely to hurt your opponent’s court position. They can only throw from the standing kubb closest to the center line.

While you might have kubbs quite near the center line on your side, you rob them of some of that advantage when you force them backward by knocking down the field kubbs nearest to you on their side.

If you’re playing with beginners or with children, there are some variations in the rules you can try that might make things easier.

When you’re putting field kubbs upright, you can put one upright as you would ordinarily do, but any subsequent kubbs knocked over would go on top of that one, building a tower.

That makes it easier and quicker to take out all the field kubbs because you can knock multiple kubbs down with a single throw.

Another way to shorten the game is to remove a kubb from the field once it’s been knocked over twice.

That helps children and beginners get a handle on how to play the game without dragging it on for too long.

Going After the King

If you want to lengthen the game, or otherwise make it harder, you can make it so that turns end after one throw at the king kubb, even if you have batons left over.

Here is a fun video going through the rules of Kubb:

If you would like to discover more great games to play outside, be sure to have a look at my list of best backyard games for some great ideas.

Overall, I find Kubb a fantastic game to play in the backyard with friends and family.

It requires a bit of getting used to, but once you understand the rules and the setup of the court, it turns out to be a highly entertaining game.

Some physical activity and strategic thinking are definitely required, which makes it an excellent game for people of all ages and fitness levels.

2 Comments
Leave a Comment Cancel reply
Welcome to The Backyard Baron, your online guide with lots of tips and ideas to turn your backyard into a real outdoor haven.
Latest