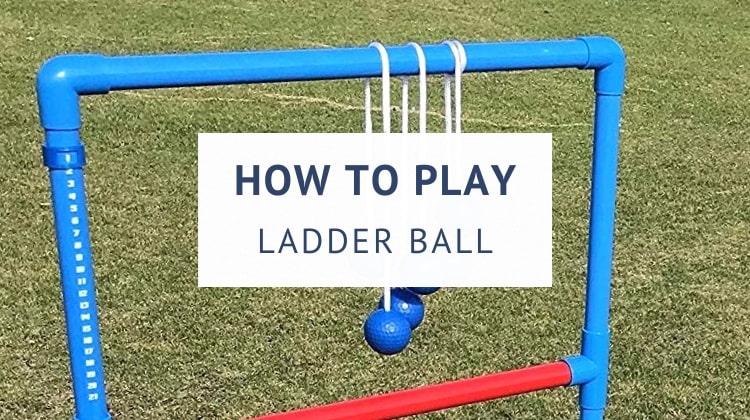 If you’ve seen people playing ladder ball in a park or at a barbecue, perhaps you might be wondering what that game is all about. Or maybe you sort of have an idea but are a bit fuzzy on the specifics.

Either way, this ladder ball guide will walk you through the game and teach you how to play. Even if you’ve played this fun game before, you might still learn something new.

Continue reading, and learn how to play ladder ball in the yard!

What Is Ladder Ball?

As you might already know, I am a massive fan of backyard games, and ladder ball is definitely on my list of favorite games to play with friends and family.

But what exactly is ladder ball?

Also referred to as lasso golf, ladder golf, and ladder toss, the game of ladder ball basically revolves around throwing two balls tied together with a rope (bola) onto a ladder.

The concept is similar to throwing a pair of tied-up shoes in the air onto telephone wires and power lines. You get the idea. Points are scored if the bolas stay on the rungs (or steps) of the ladder.

That’s ladder ball in a nutshell. Now let’s dive a little deeper into the specifics of this great backyard game.

Ladder ball is the perfect lawn and backyard game because it is so easy to set up and start playing.

To explain the game of ladder ball, I am going to walk you through the following topics:

Let’s first take a look at what sort of equipment you will need for the game.

Ladder ball is one of the easiest games to set up, which makes it so convenient to take on camping trips and to tailgating parties.

You basically only need two things for a game of ladder ball:

You can buy these together in a ladder ball set, or otherwise, make them yourself at home. Let’s explain how below.

Buying a set is the easiest option (and not expensive at all), but If you don’t want to buy a set, you can make one out of PVC pipes, wood, or metal. A homemade set might be a fun family project, too.

Check out this YouTube video explaining how to build your own ladder ball sets with PVC pipes and golf balls.

Traditionally, ladder ball uses two ladders, but you can also start playing with just one ladder if you’re short on time or materials.

Bolas are two balls connected by a rope, typically a nylon rope. Each player or team in ladder ball will have three bolas, usually in different colors, to make it easy to tell which ones belong to which person.

As with the ladders, you can buy bolas in a ladder ball set. But they’re super easy to make, using nylon rope and the ball type of your choice. Basically, any evenly-weighted ball will do, but popular options include:

You can even make a monkey’s fist knot at each end of the rope instead of adding proper balls. As long as you get a decent amount of weight on each end, it will work.

Now that you know what equipment you need to start playing, let’s get into the game’s objectives and rules.

The objective of ladder ball is really simple.

You’re going to try to throw the bola at the ladder in such a way that it wraps around a rung and stays there until the end of the round.

Each bola still hanging from a rung at the end of a round wins points for the person or team that threw that bola.

You can play the game as a one-against-one game or as two groups of up to four players. The first person or team with 21 points wins.

The game’s simplicity is one of its charms, making it ideal for family backyard game days, or events where people of different ages are playing together. It’s simple enough to understand but challenging enough to keep things interesting.

It’s also worth noting that ladder ball’s simplicity also makes it easy to adjust to suit different players’ needs, so it’s something everyone can enjoy together.

The rules of Ladder ball are easy to follow, which is great because that means it’s easy to teach to new players.

There are a few important things to note:

For example: a player goes into a round with 20 points. Say they score two points, bringing their total to 22. The two points they scored in that round don’t count, and their total is still 20. They must play another round in the hopes of scoring exactly one point to reach the goal of 21 points.

Because ladder ball is such a casual game, many people have slight variations on the original rules. Feel free to adjust the rules as desired.

As with the rest of ladder ball, players are free to change the scoring process as they see fit. But in the original game, the scoring is as follows:

Keep in mind that, like regular points, bonus points are only scored at the end of a round, so the bolas must remain hanging to count.

Ladder ball is meant for fun backyard and tailgate gatherings where it’s okay to get a little loud, albeit within reasonable limits.

As such, the game allows, or even encourages, distracting players with fun banter and movements, as long as there is no touching other players or bolas involved.

Are you ready to start playing this fun game at home? Check out my list of best ladder ball sets perfect for backyard entertainment.

Now that you know how to play ladder ball, you’ll be ready the next time someone brings it out at a family gathering. Or better yet, buy or make your own set so you can introduce it to others.

It’s a game that is easy enough to learn, and it’s the perfect way to enjoy some quality time outside in the backyard with friends and family.