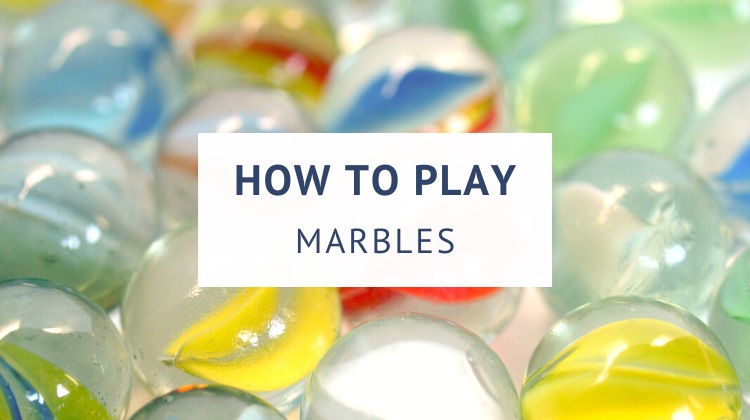 Who hasn’t played with marbles at least once in their life?

It’s one of the most classic and most basic kids games, yet today it is still a fantastic pastime that can keep kids (and adults!) entertained for hours.

In this article, I am going to walk you through the rules of the marbles game, which can be played indoors and outdoors.

There are many different ways to play with marbles, but in this article, I am going to discuss the traditional marbles game, the one that revolves around a circle.

As such, a game of marbles doesn’t require much to play. All you need is a level playing field, a circle, and, of course, a set of marbles.

This circle should ideally be at least three feet in diameter and be created on a flat surface. If you’re playing outside in the backyard or on the pavement, you can draw the circle with chalk on a flat section of tiles.

For marble games played inside, the circle can be made with a long piece of string. If you don’t want the string to move as the marbles roll over it, you can tape it down on the sides.

You can, of course, also share shooters if there aren’t enough, as long as you pay attention and keep track of whose turn it is.

Once you have the circle in place, gather the marbles in the center. You can use as many as you like, but the more marbles you put into the circle, the longer the game will last.

Some players like to place the marbles in a clump in the middle of the circle. Other players prefer to make an X pattern, with most marbles in the center and four legs. The X pattern makes it easier for your shooter to travel through the circle and hit the marbles.

When learning how to play marbles, the main thing to remember is the following three basic steps:

First, you must decide the order in which you will play. Usually, this is done by what is called “lagging”.

When lagging, a line is drawn or marked along the ground with chalk or string. Each player shoots their large shooter towards the line.

Once the order of play is determined, the first player begins the game by shooting their big marble into the circle. To “shoot” a marble, there are two different techniques.

The first technique is to place the fist knuckles-down on the ground and flick the shooter marble with the thumb.

The second technique is to place the fist upright with the thumb on top. While held by the index finger, the marble is then flicked into the air with the thumb.

Most players prefer the first technique because there is more control. With the fist on the ground, you can line up with the marble you want to bump out of the circle.

Holding your fist in the air for a spring-loaded flick is less direct and often less effective, but may work best at the start of the game.

Once the circle is empty of small marbles, the game is over. The winner is the player who bumped out the most marbles.

This is the most common recreational version of how to play marbles.

However, the official international marbles rules are very different. These rules revolve around throwing and shooting marbles into a hole, which is quite different from what we’re describing in this article.

Check out this video to learn more about the official international marbles rules:

When playing with marbles, the sky is the limit. There is no need to stick to the rules as explained above, and anyone is free to change the rules to make the game more exciting.

Let’s discuss a few common variations of the game.

Taking turns can be simplified for anyone learning how to play marbles or players with different experience levels. Instead of waiting for a player to miss a shot, each player shoots once before the turn passes to the next player.

In some versions, if a player knocks another player’s shooter marble out of the circle, it ends the game. For a less abrupt ending, if someone knocks your shooter marble out, that player is also out, and the remaining players can continue.

Some players apply a “knuckle down” penalty after a shooter marble is knocked out of play. Instead of the player with the bumped marble being ruled out of the game, they have to continue playing with the back of their hand on the ground while they shoot their marble, as an extra handicap.

The most common variation is playing “for keeps“. Playing for keeps often happens between players with large marble collections and play regularly. The idea behind playing for keeps is that each player gets to keep every marble they knock out of the circle.

If you don’t want to play for keeps, playing “for fair” lets everyone go home with their original marbles. This might be the better approach when smaller kids are involved.

For more advanced players, you can play by “calling your shots“. Calling shots means you choose which marble you want to knock out of the circle and use your turn to target that marble. If you miss your targeted marble or knock out a different marble, you lose a turn.

Let’s finish off this marbles game guide with a few commonly used terms:

There you have it, playing marbles is relatively easy to learn and can be lots of fun for all ages and skill levels.

Keen to learn more fun games to play outdoors in the backyard? Check out the following guides:

5 Comments
Leave a Comment Cancel reply
Welcome to The Backyard Baron, your online guide with lots of tips and ideas to turn your backyard into a real outdoor haven.
Latest