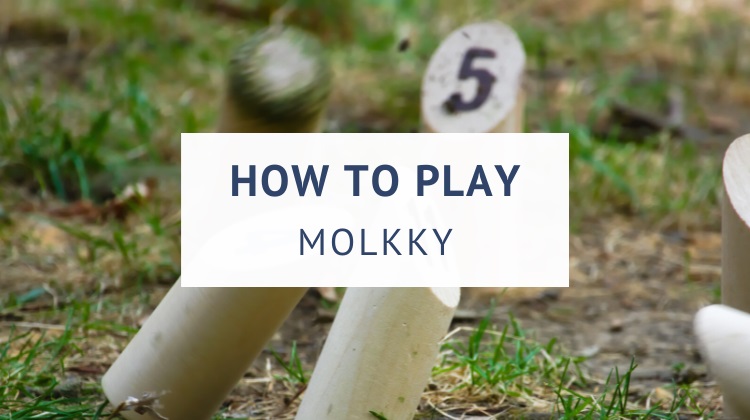 Molkky, or Mölkky, is a fun lawn game that requires some skill, a bit of strategy, and a healthy dose of luck.

It has long been one of Europe’s popular outdoor games, and in recent years, Molkky has also slowly become a hit in backyards across the US. It’s easy enough to learn and promises hours of fun for all ages.

If you’re looking for a new game to play at family barbeques or get-togethers with friends, this might be the game for you. In this article, you will learn how to play Molkky, including the rules and the setup, and we’ll discuss the required equipment in more detail.

Created by the Lahden Paikka company in 1996, Molkky is a Finnish throwing game. While the word molkky has no meaning, some hypothesize that the creators adapted it from the Finnish word polkky, which means a block of wood.

Molkky’s creators based the game on the centuries-old Finnish game Kyykka, also known as Karelian Skittles. Kyykka comes from Karelia, a region in northern Europe.

When Karelians migrated to Finland in the 20th century to escape civil war, they brought Kyykka with them. Molkky is essentially a family-friendly adaptation of Kyykka.

Playing a game of molkky revolves around players taking turns throwing a skittle (a wooden peg) at numbered pins. Players score points by successfully knocking over the pins, and the rather unusual scoring pattern makes it a challenging game to win.

It’s officially spelled Mölkky, which is also the brand name, but for the sake of simplicity, I will be referring to this game as Molkky in the rest of this article.

Playing Molkky is something everyone can learn, but it does require a bit of getting used to. You need a bit of luck, but also a sense of strategy and good throwing skills.

It’s quite a unique game, unlike the more traditional backyard games, such as cornhole. It’s a great game for those looking for something new to try.

To explain the wonderful game of Molkky, I am going to walk you through the following topics:

Before we dive a little deeper into the rules and scoring system of Molkky, let’s first discuss the equipment you will need.

You don’t actually need a lot of equipment to start playing this game. Basically, a set of pins and a throwing line are all you need to get started.

You can purchase a Molkky game set online with all the equipment you need to play, or if you have some extra wood on hand, you can make a DIY set at home.

This is what you need:

Molkky’s field setup is similar to the formation used in bowling, with the number of pins in each row increasing from the front row to the back row.

Unlike bowling, in Molkky, there are two pins in the front row and three pins in the back row, and the numbering is different too.

Arrange the pins as follows:

The skittles should be tightly bound, similar to a rack in a pool game. You’ll notice that the pin’s arrangement results in a pattern where the smallest numbers are on the outside, protecting the larger numbers in the middle.

From front to back, the rows should have two, three, four, and three pins each. Place the throwing line 10 to 13 feet (3 to 4 meters) away from the pins.

If you want to follow the rules of official Molkky competitions, draw the throwing line exactly 11.5 feet (3.5 meters) from the pins.

At first glance, the game’s rules may appear a bit complex, especially compared to simpler outdoor games such as croquet or ring toss.

However, with some practice, you will master Molkky’s rules in no time. Don’t be surprised if Molkky becomes your favorite lawn game once you learn the rules.

While it’s possible to play Molkky with only two players, it’s much more fun in larger groups divided into two teams. Once you’ve decided which team will go first (a simple coin toss will do), players take turns throwing the skittle to knock down the pins.

The Molkky, or throwing skittle, is typically tossed using an underhand throw, which is similar to the cornhole bag throwing technique.

Each player gets three attempts at trying to knock down one or more pins. A player receives points when they do successfully knock down pins. After a player scores, place the knocked-over pins upright on the exact spot where they fell over (not on their original spot), and resume play. As you can imagine, the playing field gets wider and wider as the game continues.

The game’s difficulty also increases as the pins are spread out across the field, making it challenging to knock them over. Players who fail to knock over any pins after three attempts are eliminated from the game. The first team (or person, if there are only two players) to reach exactly 50 points wins the game.

Molkky is strict about knocking over pins to score points. Pins must fall completely to the ground to count as a point. A pin leaning over onto other pins doesn’t count as a knocked-down pin.

Molkky’s scoring system is pretty straightforward. Most people play Molkky as a best out of three game, with the winner of two rounds walking away with the victory. Players score points when they knock down one or more pins.

There are two ways to score points:

Since the pins with the highest numbers are placed in the middle of the group of pins, it’s difficult for players to score a lot of points at once by knocking down individual pins.

To score 11 points in one throw, a player would have to knock down pin number 11 in the middle without knocking down any other pins. The alternative would be knocking down 11 pins at the same time, which seems almost impossible.

The game continues until one team, or player, achieves the final score of 50 points. But racking up points isn’t the key to winning in Molkky.

As your team gets closer to 50 points, it’s time to strategize about scoring the remaining points. You’ll have to calculate how many pins or which pins you will need to knock over to ensure your team reaches precisely 50 points.

Going over 50 points results in a 25 points penalty, bringing your score down to 25 points. The possibility of losing 25 points for not getting precisely 50 points contributes to the challenge and excitement of playing Molkky.

You need a bit of luck as well as good technical skills to score exactly 50 points and beat your opponent in this game.

If you’re familiar with the game Finska, you’re probably wondering what sets it apart from Molkky. People often confuse Molkky and Finska because they are almost the same game.

One difference between the two games is the layout of the pins. However, the different format is hardly noticeable. The scoring, rules, and gameplay are pretty much identical in both games.

Another factor contributing to the confusion between the two games involves branding. A Finnish company named Tactic bought all manufacturing and intellectual property rights from the investors of Molkky in 2017.

The Tactic Group basically owns the name Molkky and the registered trademark and is the exclusive distributor of the game. However, other companies sell games resembling Molkky under the name Finska.

But there are many other names for this game, and they often come with slightly different rules and field setups. For example, GoSports has a set available under the name Skittle Scatter.

GoSports Skittle Scatter Game Set
BUY ON AMAZON
If you would like to discover more great games to play outside, go and check out my list of best family backyard games for some great ideas.

The game of Molkky is definitely a lot different than, for example, playing cornhole, or playing ladder ball. If anything, it’s a bit similar to playing kubb, which also originates from Europe.

It definitely requires a bit of getting used to, but once you understand the rules, the scoring, and the field setup, you will find that it’s a fun game to play.

For me, Molkky is the perfect game to play in the backyard because it combines physical activity and strategic thinking, suitable for people of all ages and fitness levels.