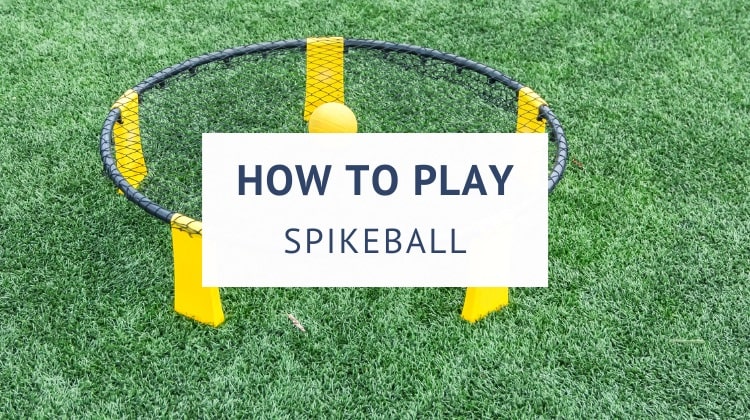 Spikeball is a fun sport that involves four people divided into two teams. It’s a relatively easy game to set up in the backyard, in the park, or at the beach, and is a great way to be active and social.

You will find that the rules of the game are quick to learn and follow, but to get good at this game, you do need to develop technical and tactical skills.

In this article, I am going to walk you through everything you need to learn how to play spikeball, including the rules, scoring system, equipment, and field setup.

The game spikeball was originally known as roundnet, a net sport that is inspired by volleyball concepts. The original game was invented in the late 1980s and was revived by a sports company called Spikeball. And so, roundnet became widely known as spikeball.

That makes spikeball essentially a branded and trademarked name. This is why you will also find other names for this game, such as spike game, volleyball spike game, slammo, and, of course, roundnet. These names are used by other sellers and manufacturers who can’t use the name spikeball.

In a nutshell, spikeball is a game set up with two teams of two players, with each opposing team taking a side across from each other. A circular net on legs is situated in the center dividing the two sides. A ball is served from one team to the other using the net, and once the game has started, players can move around.

The goal is to hit the ball using the net so that the opposite team cannot reach or return it. A team player can touch or tap the ball up to three times in an attempt to return it to the other side. The game continues until one team is unsuccessful in returning the ball, and the other team wins.

While the rules of spikeball are pretty easy to learn, you do need technical skills to become really good at this game. It’s more than just a game; it’s basically a sport.

And once you have a few people in your network excited about spikeball, the game gets more intense over time as everyone develops their skills.

To explain the ins and outs of spikeball, I am going to walk you through the following topics:

Let’s first discuss the equipment and setup of spikeball.

Any patch of grass, sand or flat outdoor surface can work. It’s essential to set up the playing area where there is sufficient space to run and dart back and forth without any trees, furniture, or any other obstacles nearby.

A spikeball game set is portable and can be easily set up in a public park or open space near a barbecue or picnic if you don’t have a big enough backyard.

Spikeball requires just a couple of core items to set up:

The net is placed in the middle of the playing area. The tension of the net should be consistently tight, though not too much.

You can purchase spikeball sets online with adjustable nets and multiple balls to use. Most nets include foldable legs, making them easy to transport and store when they’re not in use.

Which team begins first? Each side can either toss a coin or play rock, scissors, paper to decide who begins. Whatever works, basically.

Each team takes a position, equally spaced from one another, with two players on one team facing the opposing players on the other side. Each player must stand at least six feet from the net before the ball is served.

Once the initial setup is ready, the following rules apply:

Rules may vary slightly in tournaments, but the above rules are pretty standard for all spikeball games and are generally followed with little to no changes.

Players continue each game until one team reaches 21 points and is declared the winner. After one team scores 11 points, the team players switch sides. Changing sides is a good way to keep the playing field fair, especially if sunlight is a factor.

The winning team must win by at least two points, although this can differ in specific tournaments.

You can score points in the following ways (one point each):

How can a team lose a point or cause an infraction? Some key moves can penalize a player, and their team’s points, if they do any of the following:

Assigning a referee, even for a casual game, is always a good idea to ensure teams are following all the rules and the play is fair. If there are more willing participants than players, you may rotate with several extra players and one or two referees.

Unless you’re playing in a tournament, you can take as many breaks as you like and switch players if more people are available.

The terminology for spikeball is simple and easy to understand, but you may come across different terms depending on where you play.

During play, you may hear the terms “bump, set, spike”, which refers to the three hits allotted for each side during the possession of the ball.

Possession refers to the period from when the ball bounces off the net after the opposing team’s serve or hit.

Spikeball is a friendly sport, but as you can imagine, it can be pretty competitive. Mutual respect between players and opposing teams is not only a requirement, but it makes for a better, more enjoyable game.

Since this game is played in a relatively small area with lots of running, jumping, and other sudden movements, there is a high risk of collision. Players must keep their distance from their opponents and not attempt to block or inhibit their play.

Accidents can happen, of course, but fair play goes a long way and keeps the game more enjoyable. When the opposing team claims a hinder, don’t try to challenge it when in doubt.

Check out this video with a quick breakdown of the basics of spikeball:

Keen to buy a brand new spikeball set so you can start practicing this great game at home in your backyard, in the park, or at the beach?

You can either buy a genuine spikeball set or an alternative roundnet or slammo game set on Amazon. Let’s walk through these options in a bit more detail.

The Spikeball Pro Kit is the gold standard game set, suitable for tournament players who play at the highest level.

The set includes a net with sturdier legs and rims, two spikeball pro balls for extra spin and control, a portable pump and gauge, and a durable, lightweight backpack.

If you’re starting out with spikeball and intend to slowly increase your skills as you play more, rather than going for a pro set, you might want to choose the standard kit.

The size of the net and the height of the legs are the same as with the pro set, but it comes with three original balls, a rule book, and a drawstring bag.

The spikeball rookie kit, as the name suggests, is perfect for those looking to learn how to play spikeball with a much easier setup.

The main difference between the rookie set and the two sets above is that the rookie set includes a net that is 50% bigger, making it easier to keep the rallies going for longer. This set is also more suitable if you have children playing with you.

An excellent alternative to the official spikeball sets is this GoSports slammo game set which is very similar to the standard kit you can see above.

The setup is the same, with a net with five legs, three balls, and a carrying bag. If it were up to me, though, I would go for a real spikeball set, but if your budget is a bit lower, this GoSports variant is a good alternative.

Check out this video with a quick breakdown of how to set up a spikeball set:

Whether you are just learning how to play spikeball, or you’re a seasoned player, it’s a great game to get yourself active and social.

Beginner players will find that the first few rounds require a bit of energy and skill to get to understand the game. Like any sport, it takes every player some time to get accustomed to the game’s rules, techniques, and strategies.

Stick with it, and you will get better. And once you’re at a certain level, that is when spikeball becomes such an addictive and fun game to play in the backyard.

If you’d like to learn more about this sport, or even participate in tournaments, check out the Spikeball Roundnet Association website.

Keen to explore more fun and entertaining games to play outside? Have a look at my list of top backyard games for inspiration and ideas.