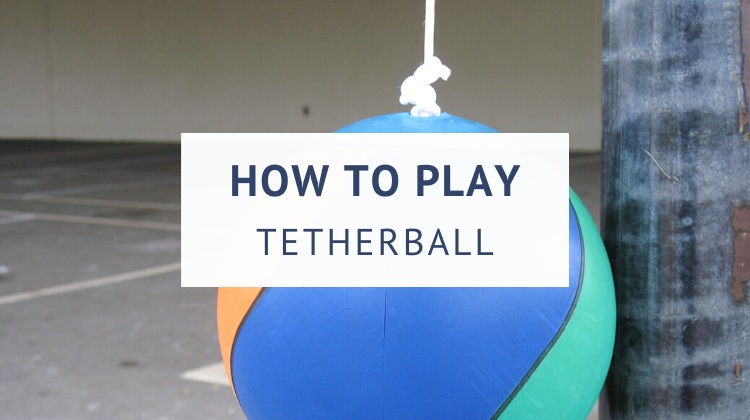 Tetherball is a fun and easy-to-play game that requires only a few pieces of equipment and very little space. The basic principle of the game is to strike a ball on a string around a pole.

The game is typically played with two people, but you can also practice by yourself. Tetherball is not just a fun game, it’s also a great way to get some decent exercise in.

In this article, you will learn how to play tetherball, as I will talk you through the rules, the scoring, the setup, and the equipment needed.

Believe it or not, tetherball has actually been around for quite some time.

Some theories suggest that the earliest concepts for tetherball developed from the classic maypole in old festivals.

When you look at the traditional dances around the maypole, you can certainly see how this might have evolved into today’s game of tetherball.

According to this article, tetherball started in Great Britain in 1875. The first official rules for the game dictated the use of a tennis ball and tennis rackets, which some referred to as tether tennis.

The game quickly grew in popularity, and by the 1920s, a tetherball pole was often seen in schoolyards.

While you can still play tetherball with a tennis ball and rackets, the ball now mostly used resembles a volleyball. This type of ball lends itself well for hitting with the hand.

Even though tetherball is widely played, there appears to be no central rules body for the game. You can find different variations of the game everywhere, and you can pick and choose the rules that you find most suitable.

I enjoy this game, not just because it’s fun, but also because it’s an effective way of exercising. I’m not much of a runner for example, and playing tetherball for a few hours is a lot more fun.

It’s also a game that you can get better at with more practice. I’m quite a competitive person, and tetherball offers a good balance between fun and competitiveness.

To explain the game of tetherball, I am going to walk you through the following topics:

To play tetherball, you will need three pieces of equipment:

The game is played around the free-standing pole in the center of a circle. The pole should be around 10 feet high, but you can change this based on the player’s height. The pole can have a diameter of 2 to 4 inches.

The string or rope is usually about 8 feet long, and is attached to the pole at the top. Any type of rope can be used, but it should be flexible and not too thick. The ball should ideally hang at least two inches off the ground.

Finally, there’s the tetherball, which typically looks like a volleyball. You can use any ball as long as it’s easy enough to hit it with your hands. The ball, of course, needs to be attached to the rope.

Rather than going DIY though, it’s recommended to simply buy a tetherball set from Amazon. They’re easy to set up and you can start playing right away.

A tetherball court can be set up in two ways:

First, create a circle with a diameter of around 20 feet. This is not set in stone but it is a good size.

To create a court with four zones, draw an X where the center of the X is the pole. If the circle is a clock, draw one line from 11 o’clock to 5 o’clock, and another line from 1 o’clock to 7 o’clock.

Two bigger zones will be the playing zones where the players can make their hits. The other two zones are the neutral zones (or out-of-bounds zones, foul zones), where players cannot enter during play.

Here is a diagram:

A court set up with two zones is much easier, and keeps the game a bit more simple. The court is still a circle, but only contains two zones, one zone for each player.

To make it even simpler, don’t worry about zones at all. Two players start on opposite sides and can start playing from there and move around freely. This basic setup is best for kids who just want to have a bit of fun.

If you’d like to learn more about setting up a tetherball game, check out my tetherball court dimensions article with a full breakdown of what the court and the pole should look like.

The rules for tetherball are quite straightforward.

Players decide who will start serving. After the first game, the winner gets to keep the serve. The player that starts serving, strikes the ball in the direction they choose, or otherwise mutually agree upon.

The receiving player returns the ball, and can only do so from within their zone. If you miss the ball, you can try to hit it back when it re-enters your zone. When your opponent misses, you can hit the ball again to increase its speed when it comes back to your zone.

The idea is to strike the ball such that the rope wraps around the pole. Once the entire rope is wrapped around the pole and the ball can’t be hit anymore by your opponent, you win that round.

If you are going to play alone, the aim is to keep the serve going. Each time it enters your zone, you have to hit the ball in the opposite direction. You can time yourself to see if you are improving.

A point is scored when a player manages to get the rope fully wrapped around the pole unless they commit a foul. You can set the number of points before each match; for example, 21 for a long match, or a best-of-9 for a quicker match.

If there are multiple players, the loser leaves the court, and the winner can challenge the next player. The winner can keep serving.

There are a few ways you can commit a foul and receive a penalty while playing tetherball.

Here are some examples:

When someone commits a foul, you can not allow them to hit the ball the next time it is in their zone, or they can be disqualified and automatically lose a point.

Tetherball is a pretty straightforward game, but more experienced players can apply techniques and strategies to throw off their opponents.

One way to do so is by suddenly varying the speed and angle of your hits. Constantly hitting the ball as hard as you can, may become predictable.

You can hit the ball with either hand. Sometimes you can make it look like you’re coming in from one angle, and then you change the hit with your off-hand at the last moment.

Another thing you can try is hitting the ball towards your opponent instead of going wide, which can make their attempt to return the ball more challenging, or they may even go out of their zone.

If you would like to discover more fun games to play, check out my list of best backyard games with some great options.

As easy as the tetherball rules are, you do need good skills to get better at this exciting game. The best thing you can do is simply get started to see whether you’re going to enjoy playing tetherball.

Buy a tetherball set online that is easy to set up, and if you do enjoy playing, you can always try to create a permanent tetherball court in a corner of the backyard.