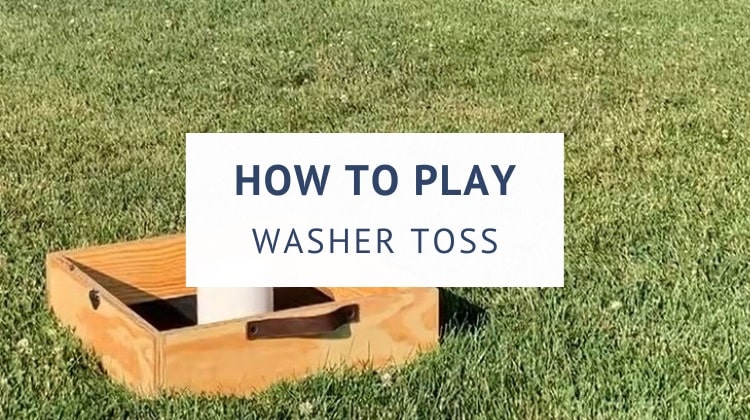 If you’re looking for a backyard game that’s simple to set up and fun for all ages, then washer toss is a great option for you to consider.

In this article, I will walk you through the washer toss game rules, including some alternative and advanced options.

I will also explain how to set up the game with correct dimensions and distance, how to keep score, and share some insider tips.

What Is Washer Toss?

Washer toss, also known as washer pitching, tailgate toss, washers, or sewers, is similar to cornhole or horseshoes in that you’re tossing an object with the aim of getting it as close to a set target as possible.

It’s a simple game that is easy to learn for everyone, which makes it that much more fun to play for all ages and fitness levels.

The idea is simple; throw a small round object (washer) into a square-shaped box to earn a point. Bonus points if the washer ends up in a small cup in the middle of the box.

The origin of washer toss is a bit of a mystery, although you might find various stories online diving into where the washer toss game may have been first invented, but I’m not going to bore you with that.

A washer is a thin plate with a hole in the middle that can be used in various ways. Read this article about real washers if you’d like to learn more.

The game, at its core, is super basic, and anyone can learn how to play. But as you play this game more often, you will notice that there is quite some skill to be developed to get better and better.

When you can get a few mates together to play regularly, washer toss becomes more than just a fun pastime. As you play more often, your skills will improve, and a healthy dose of competitiveness becomes a part of the game.

GoSports Washer Toss Game Set
BUY ON AMAZON
Are you ready to play this fun game at home? Check out my list of best washer toss sets, so you can start playing in your very own backyard tomorrow.

To explain how the game and rules of washer toss work, I am going to walk you through the following topics:

Let’s first have a look at the equipment you will need.

There are two crucial equipment elements in the game of washer toss:

First, you will need two target boxes. These are usually plastic or wooden boxes, measuring about 14×14 or 16×16 inches. In the middle of the box is an open cup or section of a pipe that is about 4 inches wide.

Second, you will need washers. These are round, thin disks with a hole in the middle and are usually made of metal or plastic. Typically, these are about 2-2.5 inches in diameter. You will need 8 of these (preferably 4 in each color), although some sets come with only 6 washers.

Washer toss game sets are easy enough to make, or you can buy one relatively cheaply online, which is what I always do.

Place the target boxes on a flat and open space, 20 feet apart (though you can shorten or lengthen this based on players’ abilities).

2-Player game:
Players stand on either side of the target box and throw their washers in the same direction. Rotate sides after each round.

4-Player game:
Players from opposing teams stand on either side of the target box, with teammates standing across from each other.

You may have already guessed this, but the objective of the game is to score more points than the other team.

A team or player scores points by successfully throwing their washers into the target box. Whoever scores 21 or more points first, wins.

This is decided by a “diddle”, where each player throws a washer toward the target box. Whoever has the closest washer to the central cup goes first.

A second diddle happens if there is a tie in the first round.

These are the basic rules of washer toss:

There are also a few more advanced rules to make the game a bit more technical and exciting.

Exacta rule:
A player, or team, has to get exactly 21 points to win, and if they go over, they go back to 15 points and work their way up again.

Skunk rule:
If a player, or team, scores 11 points before the other team scores any points, they win the game.

Whitewash rule:
If a player or team scores 17 points and the other team has scored only 1 point, the team with 17 points wins the game.

The washer toss scoring system is as follows:

The concept of cancellation scoring applies to washer toss, which means that only 1 team can score points per round.

Each point that team A scores takes away from team B’s score. The scores cancel each other out, and the winner of the round earns the difference between the two scores.

You already know what the washers, the target boxes, and the central cup are, but you might hear some more funky terms.

Playing washer toss is always more fun when teams agree on rules and play together nicely. Here are some tips to keep play friendly:

When you’re throwing, throw underhand for the best accuracy. Some players like to curl their index finger around the disc, similar to when you skip a rock.

Find a good stance that works for you. You can put one foot beyond the box, which might help with the trajectory, or anchor in place with your feet hip-width apart. Take note of when a throw works, and repeat that stance and motion.

Washer toss is a fantastic pastime for all ages and fitness levels, the perfect game to play in the backyard with friends and family.

While the washer toss game rules outlined above are the most commonly accepted ones, you can change them up to make them work for you.

For example, you could move the boxes closer or further away, or don’t use cancellation scoring, just to give you some examples of flexibility.