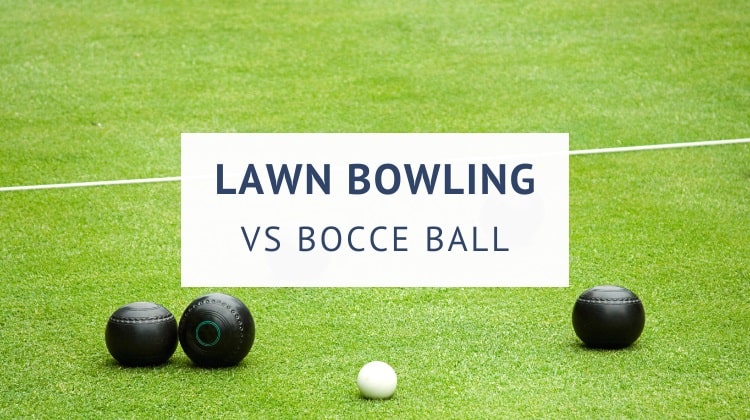 Lawn bowling and Bocce Ball are two fantastic boules games to play outdoors, either in the backyard or on a more professional court.

The two games are very similar in style and characteristics, which is why people often get the two confused, but there are some key differences between the two.

These differences are mostly around the type of balls used, the variations in throwing style, and the distinctions between playing courts.

In this article I am going to run you through these differences, as well as the similarities, in a bit more detail.

Petanque is another boules game that often gets confused with bocce. Read my guide to the differences between petanque and bocce ball to learn more.

From origins and game play, to distinctions and unique attributes, exploring lawn bowling and bocce ball through comparison is fascinating and fun.

Let’s first quickly explain what the two games are.

What Is Lawn Bowling?

Lawn bowling, or lawn bowls, or simply bowls, is a sport where players roll biased balls onto a court with the aim to land the balls as close as possible to a specific target.

This target is a smaller ball typically called “jack” or “kitty”, which is launched onto the field at the beginning of a game.

When bowling a ball, a player can hit the jack, which can lead to the target being moved to a new spot. Points are scored based on the distance between the balls thrown and the jack. A measuring tape can be used to establish the distance.

The noble sport of lawn bowling is quite old, with origins dating back to thousands of years ago. It grew popular in many European countries throughout the 13th century, especially in England. Today, more than 50 countries actively participate in official lawn bowling matches.

In essence, the bocce ball game is very similar to lawn bowls. The concept is the same; players need to throw balls to a target ball such that they land as close to this target as possible.

Bocce ball is very easily accessible. All you need is a strip of grass or sand (or any other type of surface that is nice and flat), a bocce ball set, and a set of instructions with the rules.

The game can be played with two to eight players in one-on-one, two-against-two, or four-versus-four teams. This means you don’t need to get a large group of people together to get started.

Both lawn bowling and bocce ball have a moveable target, and both games’ objective is to roll or pitch another ball towards that target to earn points.

Lawn bowling requires four balls and the jack. The balls used to accumulate points in lawn bowling are biased, meaning that the balls are not symmetrical nor roll forward as expected of a spherical ball.

The term of art “bias” was specifically coined for lawn bowling. Official lawn bowling regulations require the minimum bias allowed and the range of diameters, but players can make specific choices based on preference within these rules.

Since lawn bowling aims to control how close the bowling balls are to the jack, practicing specific techniques to release the biased balls is critical to success.

Bocce balls, on the other hand, are spherical. Players toss balls toward a smaller ball, the pallino. The game balls are equal in size and do not require same throwing technique as with lawn bowling to deal with the bias.

Lawn bowling requires a player to roll the balls towards the jack, a similar movement to indoor bowling with a heavy ball rolling towards pins at the end of an ally.

This extended rolling contact with the ground dictates the best type of surface for lawn bowling, which is usually very smooth grass or something similar.

With bocce however, balls are thrown rather than rolled, to get the balls as close to the pallino as possible. An underhanded throwing technique is the preferred and best approach to launch the balls in a traditional bocce game.

When trying to work out which game is being played, just watching how players throw or roll the balls and the playing surface is often the quickest way to determine if it’s lawn bowling or bocce.

A bocce court can be gravel, sand or (long) grass and typically measures 13 feet by 90 feet. Lawn bowling is played on a court that is nice and smooth (grass), is a bit larger in scale and is often square.

Due to the specific bias of the balls and the rolling technique used to roll the balls towards the jack, the lawn bowling playing field must be as smooth as possible to allow for maximum distance and specific placement.

Traditionally, lawn bowling matches are played on smooth grass, or bentgrass, and are larger than most recreational bocce ball playing areas.

Bocce ball allows for greater flexibility in the playing surface, with many games played on sand or grass. The ability to play in various settings makes bocce ball a bit more accessible for a beginner or recreational player.

Hopefully this lawn bowling vs bocce ball guide has been helpful for you. My preferred game? Bocce ball!

Not that I don’t like lawn bowling, it’s just that bocce ball is perhaps a bit easier and quicker to set up as a backyard game to play.

Speaking of which, check out my list of top backyard games for families for more backyard entertainment ideas!