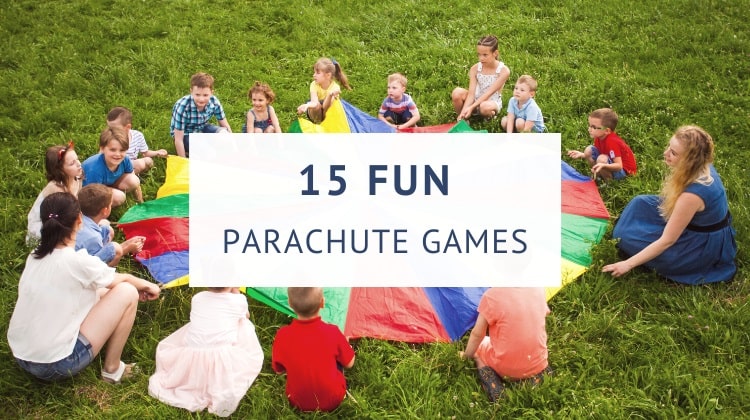 Playing parachute games outside in the backyard is one of the most effective ways to keep young children entertained. The number of games that can be played with one giant parachute is endless, and kids can have tons of fun for hours.

In this article, I am going to share 15 of the best outdoor parachute games that kids will love. Some of these games are just for fun and entertainment, while others also have educational value.

In no particular order, here is my top 15 outdoor parachute games.

If you’ve played parachute games as a kid, some of these may bring back some great memories.

This is a basic parachute game, which is great for getting kids used to the parachute and letting them warm up for more complicated games.

The setup for this number clock game is very simple. Place random numbers (on cards) around the outside of the parachute so that each color in the parachute has a different number.

Instruct each child to stand at a number and grab the parachute. Put on some music and get the children to walk in the same direction while holding their part of the parachute, leaving the numbers on the floor.

Once the music stops, the kids must stop walking. Each child must read out the number they’ve stopped at. This game can help get kids familiar with counting and learning numbers while having fun and being active.

Another basic but fun parachute game is bounce count. Get a ball (rubber ball, softball, beach ball, anything will do) and place it in the center of the parachute.

Instruct all children to grab the parachute and, in unison, bounce the ball into the air as high as possible. As the ball is in the air, all kids must count out loud, starting with one.

Once the ball lands back onto the parachute, bounce it again high up in the air and continue counting. This game helps kids learn to count and work together as a team handling the parachute.

Cross the bridge is my personal favorite parachute game, as there is an element of excitement and suspense.

Get the children to spread around the parachute and hold it at chest height or higher.

Call out the name of a child who then needs to run under the parachute and try to make it to the other side without getting trapped by the other kids.

Tug of war is a classic game for all ages, and kids sure love to play it as well with the help of a parachute.

Split the group into two teams and have them stand on opposite sides of the parachute. Instruct them each to grab the parachute and, on your call, begin tugging.

The rules are simple. The first team that pulls the other side onto their side wins. Kids will love the competition element and team aspect of this parachute game.

This parachute game requires a lot of energy to make it work, so make sure the kids are ready for this.

The idea is to create a wave effect by alternating the sitting and standing up as quickly as possible.

This is a fun parachute game that will help kids get familiar with colors while also improving their coordination skills.

Place the parachute flat on the ground with the children standing around it. You call out a color, and the participants then have to stand on the part of the parachute that matches that color.

As the game progresses, you can make it more exciting by giving more detailed instructions. For example, place the left leg on the color yellow. Or, jump to the color green.

There are no limits to this game here, just use your imagination, and everyone will have a fantastic time.

This is a super fun game that requires a bit of teamwork.

Grab a bunch of small balls (tennis balls, softballs), and get the kids to start bouncing as fast and hard as possible.

The key here is to do this in unison; otherwise, this game will turn into chaos (although that can be fun too!). The kids need to keep bouncing the parachute until all balls have fallen onto the ground.

If it’s a warm summer’s day, consider using water balloons for even more fun and entertainment; be ready to get a little wet!

Begin this parachute game by having each child grab the edge of the parachute and lift it above their heads.

You will call out two names, and those two children will run underneath the parachute to shake each other’s hands and then run back. They must be back in position before the parachute drops and traps them.

This parachute game requires a little planning on your part. Prepare a little treasure box and fill it with small toys and prizes for the children.

Get all participants to hold the parachute from the edges and lift it to knee level. Place the box on the floor underneath. Call out the children’s names one at a time and tell them which toy or prize they need to retrieve.

Each child must then crawl under the parachute to find the treasure. Make sure you include enough prizes for everyone so no one is left out!

This is another parachute game that is great for a bit of physical exercise and chaotic entertainment.

Get all the children to hold the parachute with one hand, all facing the same direction. On your call, get the kids to start walking in a circle while firmly holding the parachute.

Then, on your command, the kids need to quickly change hands, turn around, and walk in the other direction.

This game can go on for as long as you like, and you can make it a bit more complicated by including instructions such as sitting or jumping.

This parachute game works best when there is a large group of kids involved. Divide the children into 2, 3, or 4 groups, and assign each group a number.

On your call, all the kids must take their shoes off and throw them underneath the parachute. Get the kids to slowly walk in circles with the parachute and then suddenly call out a number.

All kids in that group with that number need to then crawl under the parachute, retrieve their shoes, and put them back on as quickly as they possibly can.

If you have Lego bricks at home and your kids enjoy playing with Lego, then this parachute game is going to be a lot of fun.

This game will improve their coordination and teamwork skills, all while getting familiar with all the different colors that exist.

Most parachutes will have a hole in the center. The objective of this game is to collectively try and roll a ball into this hole.

The kids need to hold the parachute firmly, such that it is as straight as possible. They then need to work together as a team and make sure the ball is directed to the hole in the center of the parachute.

This is a great game to develop teamwork, coordination skills, and perhaps a bit of patience!

The mushroom game is perhaps the most classic parachute game; it’s tons of fun because it’s so easy to do.

All participating children grab the edge of the parachute and hold it at knee level.

On your call, they need to lift the parachute as high and quickly as possible, catching the wind underneath, and create a big mushroom-like shape.

You can make this game a bit more complicated by adding a few rules. For example, you can get some participants to quickly go to the center of the mushroom and hold it up while other children walk inwards with the parachute edge, to further emphasize the mushroom shape.

Let’s conclude this list of fun outdoor parachute games with a game that is super easy to do and will create a bit of a wow effect with kids.

Place a whole bunch of balloons on top of the parachute. Get all participants to evenly spread around the parachute and hold the handles.

On the count of three, everyone needs to lift up the parachute quickly and then bring it down just as fast.

This will get the balloons to float in the air, which creates a fantastic visual effect and triggers a sense of achievement.

More fun backyard games:
How to play a game of marbles.
How to play hide and seek outside.
Pin for later!