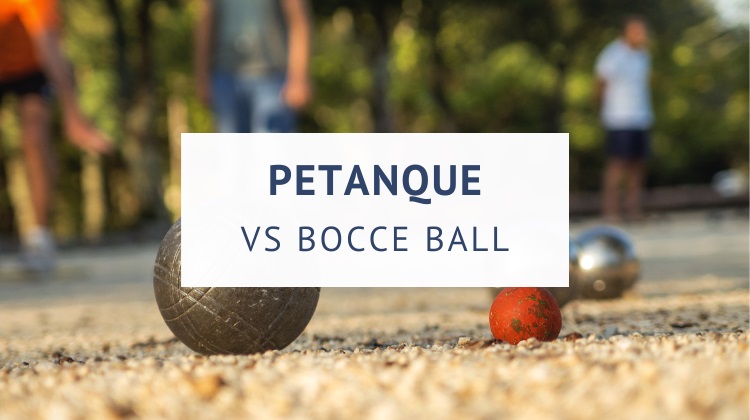 If you’re curious about boules sports, odds are you have heard of the games Petanque and Bocce Ball. These two games are often used interchangeably, but they’re definitely not the same.

In fact, both games have totally different origins and separate international fan bases to boot. So let’s get down to it and talk about Petanque vs Bocce Ball and outline their differences and similarities.

Lawn bowling is another boules game that often gets mixed up with bocce. Read my guide to the differences between lawn bowling and bocce ball to learn more.

Before we discuss the main differences and similarities between bocce ball and petanque, let’s first quickly explain what these two fun yard games are.

Petanque is a French “boules sport”.

Boules are a subset of sports that use balls (“boules” in French) in a bowling manner. We can include lawn bowling, boule lyonnaise, and Raffa, among the popular boules sports.

So what’s unique about Petanque in the world of boules sports?

First of all, it’s thoroughly French. The game was invented in a French village in 1910 and quickly evolved into a hugely popular pastime within France and in the rest of Europe.

Petanque is a true classic boules sport. The aim of the game is to throw a metal ball as close to a smaller target ball (the “jack” or “pallino”) as possible. If your ball ends up closer to the jack than your competitor’s ball, you win a point.

The game can be played with only two players, or two teams consisting of two or three players. Players throw the balls from a small circle at one end of the court.

The bocce ball game is very similar to petanque. The basic concept is the same; players need to throw balls to a target ball with the aim to land them as close to the target ball as possible.

Bocce ball is very easy to set up. All you need is a strip of grass or sand (or any other type of surface that is nice and flat), a bocce ball set, and a set of clear instructions.

Bocce can be played with two to eight players in one-on-one, two-against-two, or four-versus-four teams. The team with the ball closest to the jack wins the round.

They receive one point for that ball and an additional point for every ball they got closer to the jack than the opposing team’s closest ball.

To the untrained eye, a game of Petanque and Bocce Ball might seem like one and the same game. And to a large extent, that is true. After all, both games are boules sports.

But if we look closer, we will see that there are just as many things that make them unique as make them similar. Let’s find out!

The core similarity between Petanque and Bocce Ball is their use of balls and bowling motions. It’s no wonder why we call them both boules sports. From a distance, both games look eerily the same.

Players are relatively stationary when they throw (or roll) a ball onto the playing field towards a smaller ball, potentially hitting other balls while doing so.

Both Petanque and Bocce Ball work under the same basic principle as bowling, curling (for you winter sports enthusiasts), and even horseshoes.

All these sports require players to hit or come close to a target by throwing an object.

A few other similarities between Petanque and Bocce Ball are:

Now that we know a little more about both Petanque and Bocce Ball and their similarities, let’s now have a closer look at some of the core differences.

Perhaps the best way to differentiate these sports is by starting with the ball or “boule”.

A petanque boule is light at 1.5 lbs, it’s small (73 mm diameter), is made of metal (usually steel), is often hollow or filled with sand, and is uncolored.

Bocce balls are heavier at 2 lbs, and they’re also bigger (107 mm diameter). They come in wood, resin, or plastic varieties, all brightly colored.

Bocce balls on the other hand are often colorful. They come in sets of eight. Blue, yellow, red, and green colors help with teams.

The throwing technique is different too. A petanque ball is easier to toss higher into the air, whereas bocce balls are bowled or rolled.

In keeping with the boule types, players aren’t allowed to hit the small ball, while bocce encourages it.

The playing fields are different too. Petanque courts are usually about 15 meters (49 feet) long. Bocce courts, on the other hand, are almost twice as long (27 meters or 91 ft). Both courts are 4m wide.

But the differences between petanque and bocce ball aren’t just about the playing field, the rules, or the equipment.

Both games have long, proud legacies and traditions. And it is often those traditions that can make the two games quite different and unique.

Hopefully this petanque vs bocce ball guide has been helpful for you.

I enjoy both games equally as much, although I have a slight preference for bocce, but only because I play it more often.

If you’d like to hear more ideas for fun games to play, do check out my list of best backyard games for some inspiration.