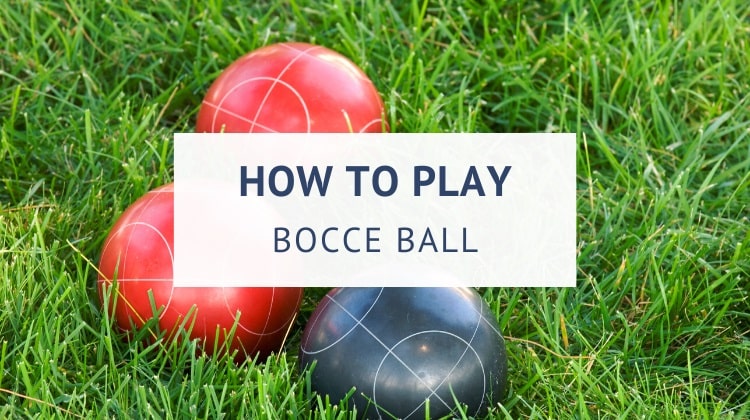 Bocce ball is a simple yet fun game to play in the backyard or in the park. Over the years, I have become a big fan of bocce and have played many games with friends and family.

In this article, I am going to explain what bocce is, how the rules work, and how best to play this game in the yard. Note that the below rules are for casual backyard play, not for regulation play.

Ready? Let’s get into it!

The game of Bocce Ball is one of the oldest games in the world. Quite literally, because it was a popular game in ancient Greece and Rome, and even before that in Egypt.

Bocce ball, or just bocce, is a simple game that can easily be played at home. The name bocce ball is derived from the Italian word boccia, which means bowl. Bocce is simply the plural form; bowls.

You can think of bocce much like lawn bowling. Although, unlike in lawn bowling, bocce balls are spherical and evenly weighted. There is not much to the outdoor bocce ball rules, and the equipment needed is very minimal.

What’s great about at-home bocce is how customizable the game is. All you need is a strip of grass (or sand, dirt, or any surface that is soft and flat), a bocce set, and a set of instructions with bocce ball rules.

Read on to learn how to place bocce ball in the backyard or anywhere else in the outdoors.

Picking up a new sport can seem like a daunting task. All those rules, strange equipment, and confusing scoring systems can put anyone off.

But bocce ball is surprisingly easy to learn, and here is a breakdown of all the aspects of this awesome backyard game.

To explain the game of bocce, I am going to walk you through the following topics:

Let’s start with the equipment required to play this game!

There are four major components to a bocce set:

Note that there is no need to create an official court for casual bocce games in the backyard. However, if you’d like to learn more, read my guide on bocce court dimensions for a diagram with all the necessary lines and markers.

Begin by picking your teams. You can play bocce ball with two to eight players in one-on-one, two-against-two, or four-versus-four matches.

It’s important to point out that professional bocce ball sets have balls in two colors. If you’d like to play with more than two teams (either as individuals or multiple people per team), it’s best to look for a set with balls in more than two colors. Or otherwise, find a way to mark the balls.

To start the game, set a point to throw from. You can mark it out with a rope or something similar. All players must throw their balls from behind this line.

Next, pick a player to toss out the jack. Wherever it lands, that will be your target for this round.

Whoever wins this round will toss it out on the next. In each subsequent round, alternate which end of the lawn you are playing from. This keeps the games fair and enjoyable, and can also help to prevent too much wear in one area of your lawn.

Once the jack has been thrown, the person who threw it will also throw their bocce ball first. The game’s objective is to land your team’s balls as close to the jack as possible.

It is important to note that you have to bowl the ball at the target. That means underhand tosses only.

After the first person tosses their first ball, each team takes turns throwing their bocce balls until all eight have been thrown. Knocking and moving the jack and your and your opponent’s balls is okay.

Once each player has thrown all of their balls, the score is totaled. The winner starts the next round.

If you’d like to learn more about ball throwing styles and techniques, check out my guide explaining how to throw a bocce ball, which goes through the stance, grips, and techniques so you can improve your skills.

For example, if team A has three balls that are closer to the jack than any of team B’s, team A will receive three points.

If both teams have landed their closest ball the same distance from the jack, then the round is a tie, and no points are scored. This would be the perfect scenario to bring out that measuring device.

Additionally, if agreed upon, bocce balls that are touching the jack at the end of a round are worth two points.

In this case, if team A has two balls touching the jack and one closer than team B’s closest ball, then team A would receive five points.

A game ends when one team has reached an agreed-upon goal. Common point goals are nine, eleven, twelve, and fifteen. The winning team must win by two or more points.

Are you ready to start playing this fantastic game at home? Check out my list of best bocce ball sets for some good quality and affordable options.

Outdoor bocce ball rules are straightforward for beginners and easy to customize to player preferences. The winning score, scoring specifics, team sizes, initial player, distance to the jack, and even playing field size are also easy to modify when playing bocce ball at home.

To summarize, you will need a bocce set and some lawn space. Each team has four bocce balls and takes turns throwing them towards the jack. The team that ends the round with the ball closest to the jack wins. Play continues until one team has beaten the other by two or more points.

This simple and casual game is the perfect way to pass an afternoon at home, and with all the possible variations, it is ideal for all ages and abilities. All you need is eight bocce balls, a jack, and a bit of open lawn.