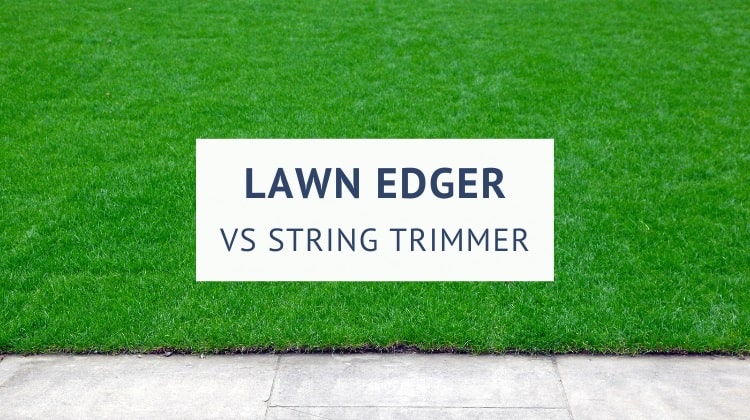 Go to any home-improvement store and you’ll find aisles and aisles filled with different yard tools. If you’re working on a budget or have limited tool storage space, you’ll want to know which of those many tools is necessary and which you can live without.

This search often brings people to the debate over lawn edgers vs string trimmers. These two tools are very similar and can do some of the same jobs, which further complicates the differences between them.

If you’re interested in buying a string trimmer or edger, keep reading. I will go through the key differences between the two tools, when to use each, and explain the different types of lawn edgers and string trimmers available.

Both string trimmers and lawn edgers are used to sculpt and finish your yard for a clean final product.

But they each have many other uses beyond that, as well as some overlapping functionality. To fully understand how these two yard tools differ, let’s first take a closer look at each.

What Is a String Trimmer?

A string trimmer, also known as a weed whacker or weed eater, is a long-handled tool with a string spool on the end.

This spool holds one or two lengths of hard plastic string and spins at a high velocity, effectively turning those strings into blades.

When to Use a String Trimmer?

String trimmers are meant primarily to be used to trim down lawn and weeds. They are especially useful in tight areas that your lawnmower cannot reach. They do not have wheels or legs on the bottom to dictate cutting height, however, so are less precise than a mower.

Areas of thick overgrowth can also be cleaned up using a string trimmer. Very powerful models can even be used to tackle brambles and woody brush.

In this setup, they can be used in the same way as edgers to clean up overgrowth at lawn borders. The strings, however, are not powerful enough to cut through soil.

Many string trimmer models are set up as “2-in-1” edger-trimmer tools. On these products, the head can be rotated to face down for trimmer use or sideways for edging use. Some even have a small wheel on the head to help create straighter, uniform lines while edging.

String trimmers come in a variety of types:

For all options here, the quality and power output will vary by brand and requires some research to find the right model for your needs.

What Is a Lawn Edger?

A lawn edger, or edge trimmer, is a long-handled or push tool with a flat blade that is used to create clean lines at lawn borders. A manual lawn edger looks similar to a spade but with a small, half-circle flat blade on the end.

Motorized edgers come in many varieties. Some have a look similar to a string trimmer but with a flat two or three-pronged spinning blade at the end.

Push versions look more like a lawnmower, but with a flat spinning blade that runs perpendicular to the ground mounted on the side, rather than a parallel blade mounted beneath.

When to Use a Lawn Edger?

The blade of a lawn edger cuts overhanging grass, weeds, and debris in a clean, continuous line. They are typically used where lawn borders pathways, sidewalks, driveways, or garden beds.

In addition, the blade of some models is strong enough to penetrate the dirt to further clean up edges and remove soil buildup.

These more powerful models can also be used to cut turf into strips so it can easily be removed. If you don’t have a sod cutter, this is the next best thing to use to create paths or garden beds in your lawn.

Lawn edgers, or edge trimmers, come in a variety of types:

There are a few true edger-trimmer options out there that are worth mentioning.

Not only do the heads on these models change position based on whether you’re edging or trimming, but they also come with replaceable blades.

With these options, you get a string spool for trimming and a flat blade for edging. The string trimmer option is generally comparable to other straight string trimmer models.

The edger option isn’t as precise or powerful as a wheeled model but is comparable to a mid-range handheld edger.

String trimmers have the benefit of being able to edge lawns as well as trim grass and weeds. But they are not nearly as precise as true lawn edgers and are not set up to cut through soil.

These aren’t the only differences between these two tools. The table below outlines what makes string trimmers and lawn edgers different and can help you decide which tool is best for your needs, or if it’s worth buying both.

If your main drive for buying a new yard tool is to clean up the edges of your lawn, then a lawn edger is the tool you want. These tools are made specifically for cutting back overgrowth and soil buildup at the borders between sidewalks, driveways, paths, and garden beds. Their uses are limited to this work, but they make the job very easy and leave you with a clean finished product.

On the other hand, if your main goal is to find something that can clean up those grassy areas your mower can’t reach or take down weedy growth, a string trimmer is your best bet. These versatile tools are great for cleaning up those shabby parts of your yard. They can even edge lawns to some degree but won’t give you as precise of lines or as clean a final product as an edger.

For those who want that ultra-groomed look across the entire yard, then buying both an edger and a string trimmer or a true 2-in-1 tool is the best way to go.