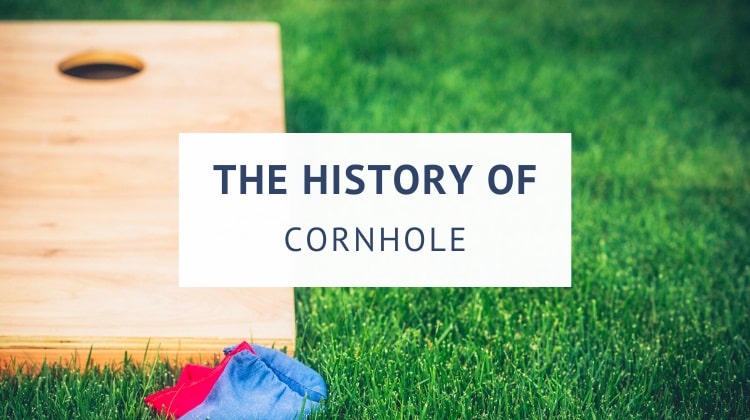 Among the most enjoyable, easy-to-play outdoor games is the cornhole game, where you aim to toss a small bag into a hole on an elevated platform.

The game has gained in popularity enormously in the United States, and is now a favorite at tailgating parties, college campuses, and in backyards.

But where does the name “cornhole” come from? And who invented this simple yet brilliant game? In this article, I will give you an outline of the history of cornhole and hopefully answer all your questions.

Looking for a cornhole set to start playing in the backyard with friends and family? Check out my list of good quality and affordable cornhole boards for some great products.

The Origins of Cornhole

Many recreational games have debatable histories, especially when there is no clear documentation, and cornhole is not an exception. Luckily, there are several hints and legends here and there to help with this.

According to some sources, the game of cornhole was invented by Native Americans. It is believed that they used to fill up animal bladders with dried beans and then tossed them around for game purposes.

Another claim suggests that the beloved cornhole game was created by a Kentucky farmer named Jebediah McGillicuddy (source).

Supposedly, Jebediah developed a version of the game to keep friends and family entertained whenever they came to visit. The game certainly has become very popular in this region.

And then there’s a story that claims cornhole was invented in Cincinnati (source). Some people there say that the originators filled bags with kernels and tossed them into plywood holes.

There are also claims that the game started in Germany, when a local cabinet maker named Matthias Kuepermann saw some boys tossing rocks into holes they had dug in the ground.

He suggested that they filled up burlap bags with dried corn instead, and went ahead to build wooden boxes for them to toss bags.

So many stories, but the true origin of cornhole remains a mystery.

However, what we do know is that in 1883 a patent was granted to Heyliger Adams De Windt for a concept game that strongly resembles today’s game of cornhole (source). He called this game “Parlor Quoits”, which used a square hole rather than a round one.

De Windt later sold the rights to the game to a toy manufacturer, and from that point, the game must have evolved into the game of cornhole we know today.

Now, let’s get to a more interesting question on how the name came to be.

How Did Cornhole Get Its Name?

Let’s get straight to the point. The exact origin of the name “cornhole” remains a mystery, just like the origins of the game itself.

If we analyze the actual word in a simplistic manner, then the name, which is a combination of “Corn” and “Hole”, suggests that the corn is thrown into a hole. When you successfully get the bag in that hole, it’s called a “cornhole”, meaning that the “corn” is in the “hole”.

This name has remained unchanged over time, even when the materials used for it have changed from corn bags to plastic pellets or resin.

Some also believe that Matthias Kuepermann, the German cabinet maker who was helping the boys improve their burlap bag tossing game, might have played a part in naming the game.

Back then, corn was in abundance. So, when Matthias suggested using a burlap bag filled with corn instead of stones, he may have unknowingly created the name we use today.

Of course, we can agree that throwing a bag of corn is a lot safer than throwing stones, right?

Other Names for Cornhole

Aside from cornhole, the game is also known by several other names depending on where it’s being played.

Here are some of these names:

Whichever name you choose to call the game, I would like to maintain that the universal name of the game is cornhole.

Most people, from around the world, will almost certainly understand what you mean when using that name.

The Evolution of Cornhole

Cornhole initially gained popularity in the Midwestern States among the farmers, because corn was abundant in the region.

However, in more recent times, the game has been a favorite among people in Cincinnati, and from there has slowly spread across the United States.

A renowned magazine, Popular Mechanics, published an article in their September 1974 issue on “how to make cornhole boards”, which obviously helped spread the word.

Towards the end of the 1970s and 1980s, cornhole’s popularity had reached Northwest Indiana, Illinois, Chicago, and beyond.

A Game for Everyone

Many bars and pubs across the country now organize Cornhole tournaments as part of their entertainment. Nowadays, you will find custom cornhole boards regularly available at family gatherings and weddings.

Among the things you will probably find at any backyard party or barbecue, aside from lots of food and drinks, are people playing cornhole.

It’s one of the most common backyard games, and cornhole classes and meetups are often organized across the country.

The game’s popularity cannot be unrelated to the fact that it is portable, and the rules of cornhole are easy enough to understand. You certainly don’t need to be an expert or a professional before you can start playing cornhole.

The game has an official governing body in the USA, and even receives airtime on ESPN, broadcasting world and national league championships. Cornhole has evolved into a serious sport, with very decent prizes to be won.

But cornhole is not just popular in the United States, though. You will see cornhole being played in various European countries, and also Down Under in Australia, to name a few places in the world.

Cornhole has evolved over the years, also in terms of materials used. Nowadays, there are custom cornhole boards made out of composite materials, and some even have LED lights. The sky is the limit, really.

There you have it, a bit of cornhole history. I always find it fascinating to read about how these fun games have come about and how they have evolved over the years.

The myths, the legends, and the real facts often get mixed up, but that’s also the fun of it. We don’t need to take things too seriously; just enjoy playing the game of cornhole with your family and friends.

Keen to upgrade your backyard cornhole entertainment? Check out my list of best cornhole drinking games for even more fun in the yard.