Home » Backyard Games » Bocce » How to Throw a Bocce Ball 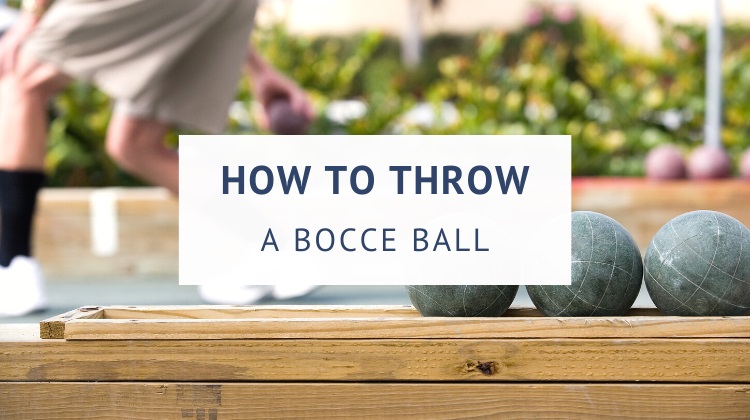 Whether you’re just now learning about bocce ball or you’re a seasoned player, you can always use a few tips and pointers to improve your ball throwing, or rolling, techniques.

This simple guide will inform you about the best stance, grip, and throw style, depending on what you’re trying to accomplish during the game.

So, if you want to learn a little more about bocce ball while sharpening your strategies and tactics, read on!

If you’d like to read more about this fun game, check out my guide to the rules of bocce ball to get a better understanding of how the game works. If you’re ready to buy a set, have a look at my list of best bocce ball sets available today.

Follow these simple steps to practice your stance, grip, and throw, so you can improve your bocce ball game and impress your opponents and fellow team players.

Regardless of which grip you decide to make your mainstay for the bocce ball, your stance is a critical part of the game. The stance is where it all starts.

When exploring ways on how to throw a bocce ball, you should start with a solid and sturdy stance, ideally with your knees slightly bent. This form will allow you to have more control and force behind your throw.

Keep your feet as far apart as your shoulders or hips. That will ensure that you have a reliable stance with your feet planted firmly.

If you’re right-handed, you’ll start leading in with your right foot to approach the bowling line, and vice versa if you’re left-handed.

Many of the more seasoned and professional bocce ball players usually throw while they’re in a slightly bent position, and remember to rest the majority of your body weight on your front foot.

In bocce ball, there are typically two different techniques to throw, or roll, a ball: overhand and underhand.

Whichever grip you choose, make sure to keep your fingers spread across the ball and maintain a reasonably tight grip on the ball. Swing your arm down and back from the side of your body. Then swing your arm forward and launch the ball.

You will find that most bocce ball players use an underhand grip to throw the ball. This is the most intuitive style of throwing, and allows the ball to smoothly roll, like a bowling ball, toward the target, the pallino ball.

The underhanded grip is often referred to as the punto technique, derived from the Italian word punto, which translates to the word “point” in English. Using this throw style, the objective is to try to roll the ball as close as you can to the target pallino.

This grip is most suitable for those with smaller hands, and also allows you to add some front spin and power to your throw.

The overhand grip, the one with your palm down, is less common and is mostly used by more advanced players.

This style of grip is often referred to as the raffa technique, and is a way to add a bit more stability and back spin to your throw.

Keep your arm beneath your shoulder when you use the overhand throw, and release the ball at the exact moment, which requires a good amount of practice.

Here is a helpful video with the two grips visualized:

Here are some of these different techniques.

Spocking is a technique that is also referred to as bombing, raffa, shooting, or hitting. You are essentially using your ball to try to hit the other balls. With this technique, you’re allowed to hit your ball so that you can get it closer to the target, or pallino ball.

If need be, you can also try to knock your opponent’s ball out of your way. You will usually use this shot by launching it into the air while having a low trajectory and no backspin on the ball.

It’s really easy to miss this shot, so make sure that you have considered the outcomes before deciding to employ spocking during the game.

If you miss the spock shot, you have a greater chance of hitting your own ball out of the play and messing up your positions.

Bank shots get used to maneuver around balls that are in your way.

When banking, you’re trying to bounce the ball off of the rails and change the angle so that you can direct it to those areas that you wouldn’t otherwise be able to reach.

Note that this is a shot used by more advanced bocce ball players. You have to have an adept hand at throwing for this technique.

Be sure to practice before trying it out during the game. This shot is best used when the pallino ball is not that far away from the railing.

As the name implies, blocking has to do with tossing, rolling, or knocking your ball to place it in a position that will block the balls from your opponent.